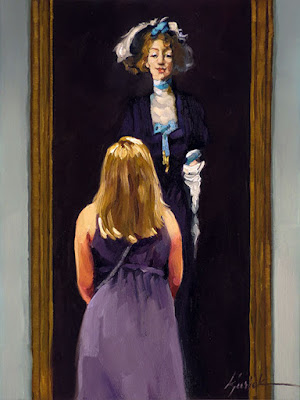 Jessica Penn, the sultry woman in Robert Henri's painting, was an actress and dancer in the famous Ziegfeld Follies.  I love Robert Henri's work - he introduced a new way of portraiture by painting on a mostly black background where the model's face is the main focus, emerging out of the dark surroundings.

Robert Henri has an interesting bio - his last name was Cozad, his middle name was Henry.  His father founded the town of Cozaddale, Ohio. In 1882, Mr. Cozad was in a dispute with a rancher over the right to pasture cattle on the Cozad family's land - he ended up shooting and killing the rancher, cleared of wrongdoing, but the town turned against him and his family.  Mr. Cozad fled to Colorado with his family, changed their names to erase the incident and his sons posed as adopted children under the surname Henri.

As a young man, Robert was a student at the famed Pennsylvania Academy of Fine Arts, went back and forth to Paris, taught at the New York School of Art - students were famous painters like Rockwell Kent, Edward Hopper, George Bellows to name a few.  Also to note, Mary Cassatt was his distant cousin.

Robert Henri led a successful, celebrated life as a painter and died at the age of 64.

From the Crystal Bridges Museum of American Art, a woman admires Robert Henri's portrait of 'Jessica Penn in Black with White Plumes'.