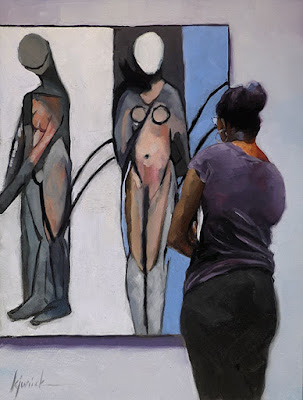 When I posted this new painting last night, I said I wanted to add a bit more interesting facts but I was late for my evening walk with the dogs.  I was in such a rush, I mistakenly wrote Picasso was the artist, which is why my eBay listing says so.  It was Henri Matisse.  Yikes.  That'll teach me.

Anyhoo.... back to 'Bathers By A River'.  It has a prominent spot in The Modern Wing of the Art Institute of Chicago - on a huge wall as you enter the gallery.  The painting is enormous, so much so, most stand way back for a view.  I'm so drawn to this painting, I beeline right to it when I'm at the Tute.

Back in 2007,  the experts at the Art Institute studied this painting in depth, knowing Matisse was known to work on paintings in stages and piecing together separate panels - and knowing The Bathers took over eight years to complete, they went into more of an examination of his technique.

The Bathers and two other paintings were commissioned by a Russian collector, originally planned as three panels to fit in the man's residence - and after seeing a watercolor study, he rejected it.  But Matisse kept working on it during the next eight years, changing colors - really the whole design.  This was evident when the conservators removed the varnish and used infrared technology and X-rays - seeing a completely different palette.  That discovery morphed into an exhibition at the Art Institute of Chicago, then MoMA, titled 'Matisse: Radical Invention, 1913-1917' - which examined more of Matisse's works and techniques.

As for Matisse, it is a fantastic biography of his life and career - I find the most interesting personal tidbit being that his wife Amelie, whom he was married to for 41 years, suspected infidelity and ended the marriage.  The woman he was having the affair with attempted suicide by shooting herself in the chest BUT she survived and returned to a now-single Matisse and was his loyal assistant for the rest of his life.

Around the age of 71, Matisse was diagnosed with abdominal cancer and after surgery that left him bedridden, he was physically unable to paint and he turned to a new medium, creating cut paper collages for another decade and produced some of the most extraordinary works you're probably familiar with.