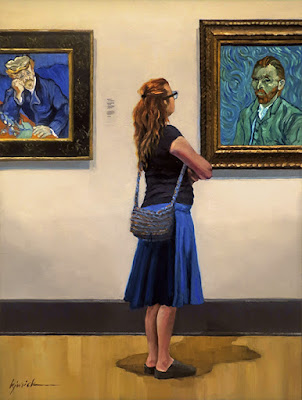 9 x 12"
oil on panel
sold
There is, there should be, a profound personal experience when one sees an original painting by Vincent van Gogh in person. Speaking for myself, my reaction depends on the subject matter.  Landscapes and still-lifes are thick with paint and multitudes of rich, vivid colors swirling and defining edges.  You want to touch it with your fingers.  There's life and movement in outdoor scenes - you can hear the crows and the rustling of wheatfields.  It puts you there, where he was painting that day.
Van Gogh's portraits evoke emotion in me. I feel his trouble or ease or torment or admiration.  The Portrait of Dr. Gachet on the left is one of several versions painted.  Dr. Gachet was a homeopathic doctor and artist himself.  Gachet cared for van Gogh in the few months before the end of his life and understandably was important to van Gogh as a friend and caregiver.  This version was owned by Gachet, bequeathed to France by his heirs and resides in the Musee d'Orsay in Paris.
The Self-Portrait on the right was painted in 1889, the last self-portrait van Gogh completed a year before his death.  Over a 10-year period, the artist painted himself over 30 times - mostly due to lacking the money to hire a model.  He sent the painting to his brother, Theo, with a note reading "you will need to study the picture for a time. I hope you will notice that my facial expressions have become much calmer, although my eyes have the same insecure look as before, or so it appears to me."  The swirls of color in the background would suggest his state of mind as he was declining physically and mentally.  It's one of the most famous paintings van Gogh completed and resides in the Musee d'Orsay as well.
Please click here for a larger view.