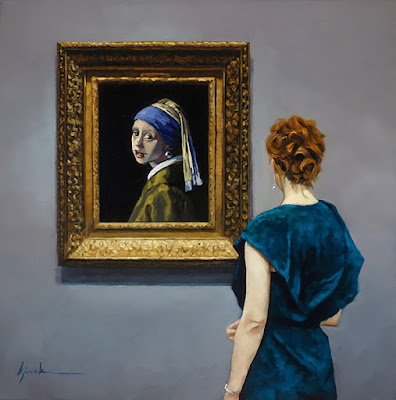 Honestly, I've had my head in painting so much, I've neglected to show anyone what I've done for my upcoming show.  So here's the new one, featuring Johannes Vermeer's famous portrait, Girl with a Pearl Earring, which, after traveling far and wide in multiple exhibitions, now hangs permanently in the Mauritshuis museum in The Hague.

The Dutch artist, Johannes Vermeer, painted only 36 known works in his lifetime.  Like many of his fellow artists/peers, he depicted scenes of ordinary, domestic life doing mundane tasks - except for Girl with a Pearl Earring, of course.  It is intimate.  It is personal.  Much like da Vinci's Mona Lisa, her identity is a mystery.  While a young woman probably sat for Vermeer, it is thought to be mostly imaginary, focusing on what the artist was known for - painting expertise and representing light.