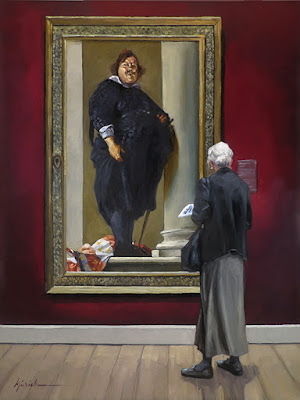 For an upcoming Figurative group show in May, at the Shain Gallery, I chose one of my personal favorite portraits of a man larger than life - the Tuscan general, Alessandro dal Borro, painted by Charles Mellin.

Alessandro was well known for his obesity, which in his time, was considered a status symbol.  Born in 1600, he studied math, joined the military, was victorious in the battlefield during the Thirty Years' War, fought against the Turks and fought for Spain and Venice.  His demise was an injury received fighting Barbary pirates.

Charles Mellin was a French painter who spent his artistic career in Italy in the first half of the 1600's as the official painter of the ruling family, completing religious scenes with an exception of a few commissioned portraits.

Portrait of a Gentleman hangs in the Staatliche Museen in Berlin.