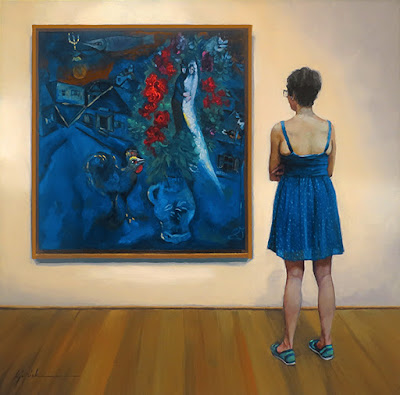 My new painting Blue Heaven will be included in a group show titled All The Blues held at the Vendue Hotel in Charleston SC - opening to the public on November 15th.  The show features work from 24 artists, all using ranges of blue as the predominant color.  My painting features The Flying Fish, by the Russian-French artist, Marc Chagall.

Chagall once said "In our life there is a single colour, as on an artist's palette, which provides the meaning of life and art. It is the color of love."  Chagall is known for his dream-like scenes, filled with memories of his childhood in Russia and symbols of his Jewish faith.  In The Flying Fish, the newly-married couple represents love and passion, as do the red roses that surround them - the rooster was commonly known as a symbol of fidelity though it could be a memory of Chagall's early life in the village of Vitebsk - the upside-down house represents imbalance or doubt - the floating fish holding three candles references the Jewish religion and said to be a tribute to his father.

It is impossible not to love Chagall's distinct style and thoughtful compositions.  This painting hangs in the Albright-Knox Art Gallery in Buffalo, New York.