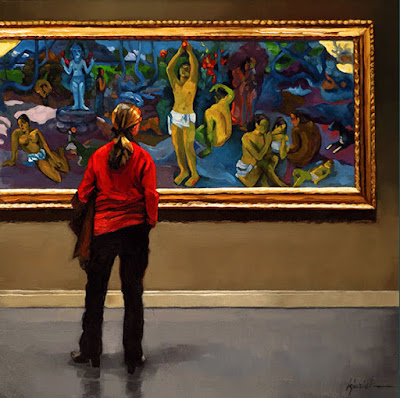 In the Museum of Fine Arts, Boston hangs one of Paul Gauguin's finest works of art 'Where do we come from? What are we? Where are we going?' - a manifesto of sorts painted while he was living in Tahiti in 1897.  This 12" x 4.5" masterpiece contains people, animals and symbolic figures with the mountains and sea in the background - oozing with rich, jewel-tone blues, purples, greens reds and golds.

What's nuts is that Gauguin painted this in a month, even told a friend after it was completed, he went up into the mountains to attempt suicide - which may or may not happened since Gauguin was famous for his self-promoting antics.

Gauguin's frustration with a lack of recognition in Paris and a lack of money is what lead him to sail to Tahiti in 1891 - stating he's leaving European civilization and 'everything that is artificial and conventional'.  Yes, he abandoned his wife and five children as well - clearly ready for a change.  At one point in his young life, he was a successful stockbroker but he took a leap of faith wanting to be an artist and he must have felt like he failed everybody and everything.

Thankfully, Gauguin shipped all of his paintings from Tahiti to his artist friend Vollard to be displayed at his Paris gallery in hopes of sales and recognition.  Interesting enough, his large masterpiece never sold, his friends attempted to donate it to the French state unsuccessfully until the Museum of Fine Arts purchased it in 1936.

I am so amazed again and again at your talent - your gift. I have worked hard on my own art in the past several years and found you as an inspiration, Love the background stories and LOVE the Netflix suggestions!!!!!! That was like finding chocolate!