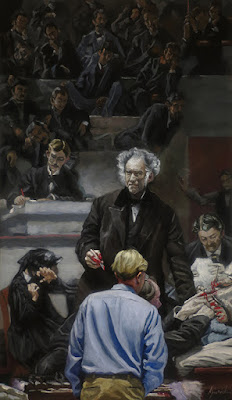 My newest painting for the show Summer Duet, opening this weekend at Robert Lange Studios features one of my personal favorite paintings The Gross Clinic, by Thomas Eakins.  Inspired by a recent New York Times article, I was reminded of my last visit to the Philadelphia Museum of Art years ago.  I strolled into a quiet room, high ceiling, nobody else there.  I walked straight ahead, not sure what was in this room, turned around and there it was.  The Gross Clinic.  Nearly 8 feet high and 7 feet wide.  My mind was blown.

Thomas Eakins was 31 years old when he completed this masterpiece.  31!  He was studying art, completely enamored with the human anatomy, bound and determined to render figures in a realistic, accurate manner.  He followed the rapid advances of medicine and participated in the theater-like demonstrations of one particular physician, Dr. Samuel Gross, a man very well-known in his birthplace city of Philadelphia.  Dr. Gross served as an advisor to the US Surgeon General during the Civil War, wrote "A Manual of Military Surgery" which was the first of its kind - providing medical instructions for Union Army battlefield surgeons.  That manual was later pirated by the South and a Confederate version was released a year later.  Dr. Gross later served as the 20th president of the AMA, going on to publish many surgical text books throughout his long career.

When Eakins revealed his extraordinary painting, critics were brutal.  The New York Times art critic described it as "so dreadful that the public may be well excused if it turn away in horror." much like the only female figure in the painting to the left of Dr. Gross.  Notice no surgical masks, no scrubs, no surgical gloves - that didn't exist at the time. The patient was suffering from an infected femur bone and with no anesthesia, underwent the amputation procedure which was revolutionary and ended the butcher-surgeries performed up until then.

The ridiculous part of the initial criticism of the painting centered around the "violence" and the melodramatic woman's reaction - when in fact, it's one of the most important works of art of the 19th century.  Eakins sold it for a paltry $200 in 1876 and it hung in the medical building and later the alumni building of Thomas Jefferson University until 2006, when the University voted to sell it to the National Gallery of Art and Crystal Bridges Museum of American Art for $68 million.  But that's not the end of the story.

The sale to the two museums was deemed as a secretive act and efforts to keep the painting in Philadelphia, regarding it as an historic object, raised $30 million, with a bank agreeing to float a loan for the remainder.  Other works of art owned by the Pennsylvania Academy of Fine Arts were thrown in as part of the final deal.