"With All Due Respect"

Today, as the U. S. Supreme Court has announced several important decisions, it seems like the right day to post my new painting, another for my upcoming show The Ladies.  It featured a portion of the large portrait The Four Justices by Nelson Shanks.  And with all due respect to the other three women Supreme Court Justices - Sonia Sotomayor, Elena Gaga and Sandra Day O'Conner - I wanted to highlight Justice Ruth Bader Ginsburg. 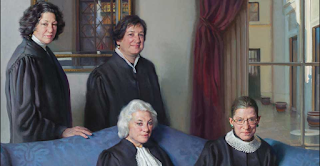 The artist, Nelson Shanks, was a world-renowned painter of classic, realism portraits - commissions for John Paul II, Princess Diana, President Ronald Reagan, Luciano Pavarotti, Justice Antonin Scalia, President Bill Clinton and Margaret Thatcher to name a few.  He got the big jobs.  He was also on the faculty of the Memphis Academy of Art, the Art Institute of Chicago, the Art Students League of New York, the National Academy of Design and he and his wife opened their own studio for teaching classical realism.

You will see several Presidential portraits by Nelson Shanks in the National Gallery of Art in DC, including The Four Justices.