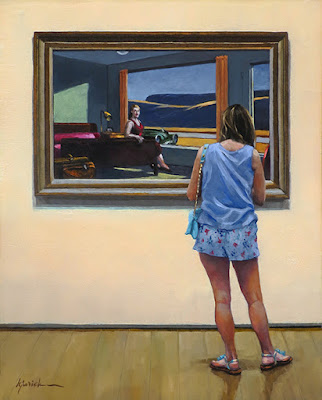 For my upcoming solo show The Ladies, I had to include one of my favorite artists, Edward Hopper.  A theme that Hopper painted, anonymous hotel/motel rooms is a subject that has lingered in my head for years.  He had the advantage, in his day, of what we call retro now - stark, mod motel rooms unlike the comfy, dark and plush ones which don't really make for an interesting painting.

Hopper painted Western Motel in 1957 when mobility and road trips were the new thing, especially out West.  I really love the car parked outside and of course the lighting.  The woman with her bags packed, no personal objects in the room, makes me think she's waiting for someone.  Or not.

Edward Hopper was one of America's great painters - born and died in New York, trained as an illustrator.  He painted everyday scenes around him, urban mostly - snapshots of trains in the city, people he could see through apartment windows, isolated figures on a quiet city sidewalk on Sunday morning.  He's famous for Nighthawks of course, an all-night diner with a few patrons.

A brilliant artist like Edward Hopper was shaped early in his life, parents who introduced him to the arts, attending theatre, concerts and museums and supported his artistic interests.  As a young man, he was quiet and reserved, six feet tall in his early teens.  He spent his days sketching, observing, building model boats he watched on the Hudson River - even built a full-sized catboat and thought he'd be a naval architect.

Hopper, instead, pursued commercial illustration, married Jo, who worked with him in the theatre painting backdrops for plays.  Something you can clearly see in his future paintings.  He had an impact on filmmakers like Orson Welles and Alfred Hitchcock.  Think of the spooky, old house on the hill behind the Bates Motel in Psycho.  He inspired me as a kid and still is in my head when I come up with compositions and subject matter.