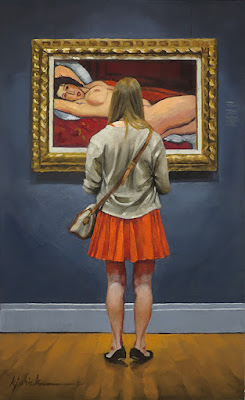 This new painting will be included in my upcoming solo show The Ladies.  How could I not consider one of Amedeo Modigliani's paintings for this theme - an artist who painted and sculpted, almost exclusively, the female figure in portraits and nudes.  Featured here is Reclining Nude, 1917, which hangs in the Museum of Modern Art in New York City.

Amedeo was one of those tortured artists, tragically dying at the young age of 35 from tubercular meningitis.  Yes, his life was short but impressive, as he created sculptures, drawings and paintings that are easily recognized as his work - elongated faces and bodies, blank eyes - a style that modernized the human figure.  His nudes were hugely controversial and in his first and only solo exhibition, there was such a crowd around the gallery that a policeman took notice and promptly ordered them taken down in the first two hours of the opening. Of course, that news led to good publicity for the gallery and added to Modigliani's reputation and success.

Modigliani was fluent in reciting poetry and painted many well-known writers and poets.  He loved to draw, obsessively sketching everywhere he went - key to future paintings and a means for a meal or a few bucks.  He wore the poverty-stricken, bohemian artist to a tee.  He discovered drugs and believed the only path to creativity was through defiance of social norms and leading a chaotic life.  Despite all that, he was amazingly prolific, sometimes drawing over 100 sketches in a day.  At one point, he completely put painting aside and spent the next 5 years devoted to sculptures.  My mother, who was a painter herself, experimented with wood carvings that were totally inspired by Modigliani's work.  So, essentially, I grew up with many a magazine clipping or postcard or book of the artist's works all around me.