"Walk A Mile (in Their Shoes)" 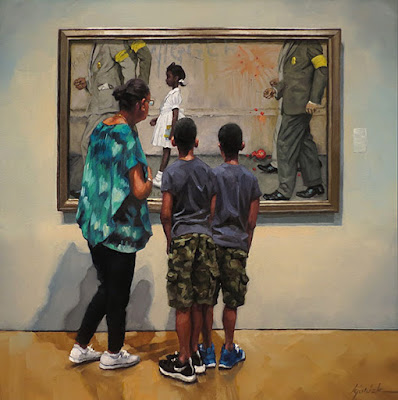 It was timely with respect to my painting - Norman Rockwell's profound painting.  The importance of equality in all Americans.  The pursuit of a nation where everyone deserves opportunities.  Dignity.  Safety.  Rights.  Hope.

Norman Rockwell's 1964 painting 'The Problem We All Live With' depicts the true event of 6-year-old Ruby Bridges being escorted to an all-white public school in New Orleans, by four U.S. Marshals during the contentious fight over school segregation in 1960.  Despite the angry crowd jeering as Ruby walked to her first day of school, as told later by one of the U.S. Deputy Marshals, 'She showed a lot of courage. She never cried. She didn't whimper. She just marched along like a little soldier, and we're all very very proud of her.'

This is a brilliant painting!

Brilliant is exactly what I was going to say. Totally!